The inception of Wheaton Hockey came in 1963 when the first team was assembled to compete in an inter-collegeiate association comprised of Northwestern, Elmhurst, and St. Procopius. In the team’s inaugural game, clad in homemade uniforms and makeshift equipment, the Crusaders skated off with an 11-3 victory over Elmhurst. With no home facilities, all games were played on foreign ice. It came early in this first season that a new rink would be completed under the stands of McCully Field, measuring 180′ x 53′, and used as a practice rink. 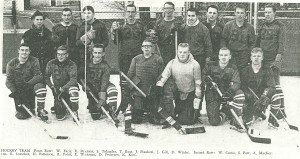 From the first drop of the puck, Wheaton exhibited extreme potential as it became part of the growth in midwestern college hockey and sought to become Wheaton’s 10th varsity sport. This group of pioneers was anchored by goalies  Tom Rost and John Plankeel while led by offensive powerhouses found in Dick Loescher, Ross Foley, Ken Knott, and Wayne Faris.

The 1980 season saw hockey move to a club sport where it has remained ever since. Two years later, the living legend, Clarence “C-Train” Edwards, became General Manager and has been guiding the program ever since. In over 50 years of its existence, the Wheaton Hockey program has produced more than 250 young men that play for Christ and His Kingdom.