Hockey began at Wheaton last season.  A group of interested skaters, led by Bob Curtis, organized and joined a local league.  The team soon established itself as one of the best in the area, and since then has progressed rapidly toward its ultimate goal of varsity recognition.  This year, the team could muster only a 5-6 record.  This may be partially attributed to several of last season’s stars having departed and warm weather putting a premium on practice sessions.  Leading the scorers at season’s end were Steve Bott and John Wroblewski with 18 and 16 goals respectively.  Freshman Bob Benett provided stellar defense work.  The team received quite a stimulant when the athletic department moved to underwrite the major part of the team’s expense.  With this support, it seems hockey will soon join the ranks of the varsity sports. 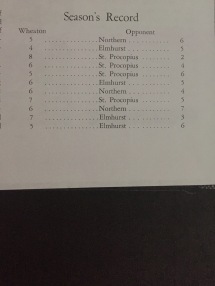